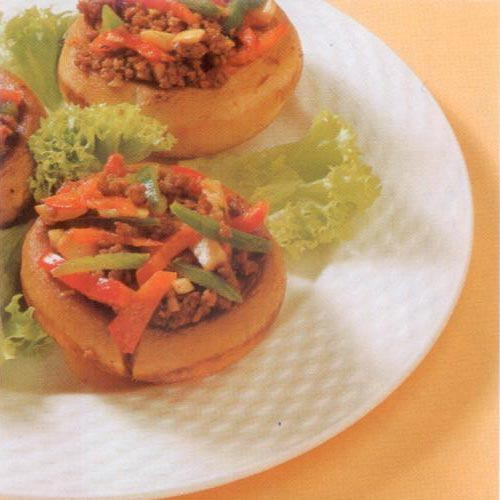 Cut the stems from the mushrooms and dip the caps briefly in oil. Stuff them with one of the mixtures below or one of your own making. (Never throw the stems away. Use them in the stuffing or slice them for the soup.) Place the stuffed mushrooms on a baking tray in the centre of a preheated oven at 200◦C or on setting 4 of a gas oven, and bake them for approximately 15 min. until done and golden brown. You can also use the microwave, but then do not dip the mushrooms in oil . Place the filled mushrooms in a circle on a plate, 3 or 6 at a time, cover them and cook for 3-6 min. at 750 Watt. The mushrooms will be cooked in the microwave, but they will not brown.